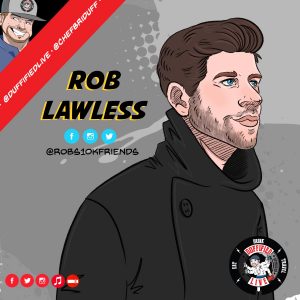 Social Media. It’s a very weird thing. We look at pictures of people’s meals, children, spouses, pets, inspirational and political posts BUT how much do we really know about them? We see someone attractive and we go to “stalk” them. Wow….that term has so many meaning now, doesn’t it?

I have followed Rob Lawless for about a year now. After obtaining his Degree in Finance from Penn State where he was involved in everything that he could be, which is a great thing for a college kid. He decided to quit his job where he worked for a very reputable financial firm and talked on a passion project that he had sitting in his notes for almost two years.

Rob is a very level headed dude. He likes people and he started a project called “Rob’s 10k Friends.” His goal? To meet, sit, and talk with 10,000 people for one hour a piece. This alone blows me away. Imagine the conversations that you could have. Imagine the people that you could meet.

I enjoyed our conversation so much that I have already passed 10 people Robs email!