Radio Influence is a digital media company based in Tampa, FL that has a primary focus on podcasting. The company was re-branded by Tampa Bay radio veterans Jerry Petuck and Jason Floyd in September of 2015 after being purchased from the previous owner. 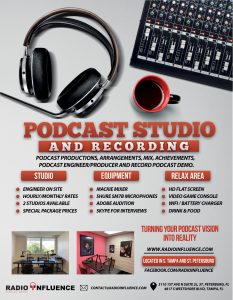 Also, Radio Influence has two recording studios in the Tampa Bay area (one in Tampa, the other in St. Petersburg) available for rental.