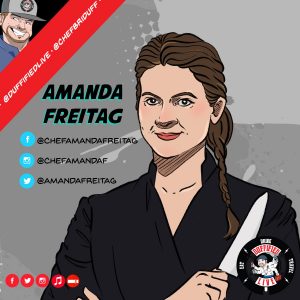 Chef Amanda Freitag is a seasoned chef with 25 years under her belt and knowledge amassed through a series of wise career choices that included long term stints at spots such as Vong, New York, Verbena, under chef Diane Forley. After Verbena, Freitag traveled to France and Italy, working for a short while at L’Arpège restaurant under Chef Alain Passard in 1999.

In 2003, Freitag and restaurateur Godfrey Polistina opened the Upper West Side restaurant Cesca Enoteca and Trattoria.

Freitag was chef de cuisine at Cesca, before moving to an executive chef position at The Harrison. On September 3, 2010, The New York Times reported that Freitag would be leaving the Harrison, and the restaurant’s owner, Jimmy Bradley, will return as a chef.

Freitag is a frequent judge on the culinary game show Chopped.

She is currently overseeing her brand and has moved into the digital era via a YouTube channel titled “It’s Easy AF,” a great series of quick “How-To” videos that will get you cooking in no time!

Listen to the Duffified Live show archive on Radio Influence!
Subscribe to the show on Apple Podcasts, Stitcher, TuneIn Radio, Google Play, and now on the iHeartRadio app! Make sure to rate and review!